The 12th annual American Fine Awards Competition (AFWC) celebration of this year's award-winning wines was held in late June at Sonoma's Buena Vista Winery. There we were presented with a double-gold medal for the third consecutive year for our Vineyard {511} Diamond Mountain District Cabernet Sauvignon--this year for our 2015.

The AFWC, which began in 2007, has become the most influential wine invitational in the country. The competition takes place each January, and is followed by a series of SIP Social events that feature the award-winning wines and help to raise money for a variety of non-profits and continues to promote the wines throughout the year. Since its inception, AFWC has raised more than $1,000,000 for local charities.

The event was hosted by Buena Vistas's proprietor and international vintner, Jean-Charles Boisset, who handed out the awards.

Notice his studded shoes. I've seen him in animal-skin shoes, but not that day.

Buena Vista Winery was founded in 1857 by self-proclaimed count Agoston Haraszthy, who emigrated from Europe in 1840 as part of the California Gold Rush. Now, with Jean-Charles at its helm, the winery has much of the pizzaz as Raymond Vineyards in Napa's Rutherford. One room, especially, has the same flamboyant style in both facilities. Somewhat bordello-like. 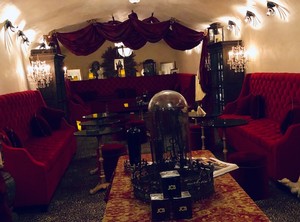