On May 19, my daughter Kelly Ojdana, our new VP of Marketing, and I, both Notre Dame University alumni, attended the launch of the Notre Dame Family Wine Academy in Napa, at the Westin Hotel. We poured our Vineyard {511} 2012 Diamond Mountain Cabernet Sauvignon at the tasting reception preceding dinner. The wines across the board were fantastic and showed a wide range of varietals and regions, but also showed the quality and pride that Notre Dame alumni put into their businesses and products. Paul Hobbs Winery, Trinitas and Brutocao also poured their wines. A delicious dinner was prepared by celebrity Chef Ken Frank, of La Toque in Napa. The Manila mango and lobster salad was delicious.

For me, one of the highlights of the event was meeting Brian Kelly, Head Coach of the Notre Dame football team, who spoke at the event. He talked about developing football players, not just as athletes, but as people--the essence of a good education. 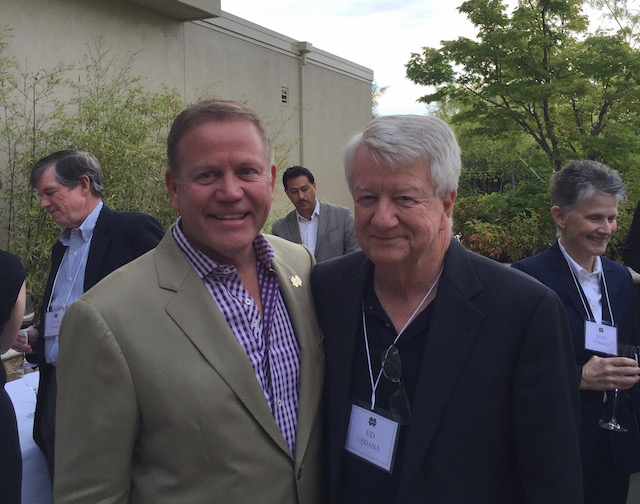 Ed and I poured our 2012 Vineyard {511} Diamond Mountain District Cabernet Sauvignon at the 22nd Annual Manhattan Wine Auction at the Manhattan Beach Country Club, June 11. The event, the largest charity wine auction in Southern California, was held on the Club's tennis courts. Luckily it was an overcast June-gloom day, so we didn't even need the umbrellas on hand. Food and wine tasting was provided from 40 local restaurants and over 50 wineries, breweries and distilleries to benefit children's education programs in Manhattan Beach. Over 1600 people attended (not counting the vendors), and over $1.6 million was raised. 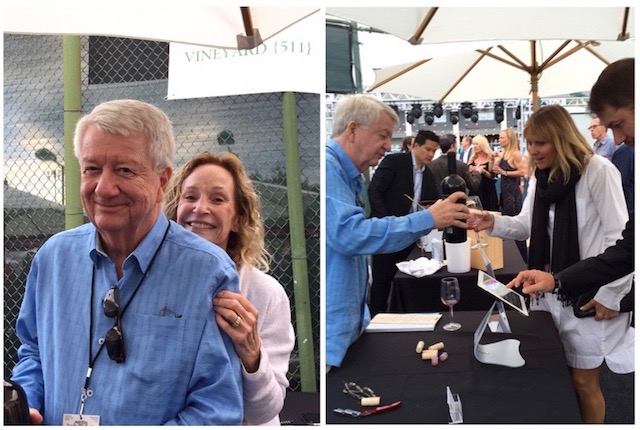 Manhattan Beach is close to our Redondo Beach home, so it was an easy commute for us. I'd actually played tennis at the Club several times in the past as part of the Marine League. We'd also gone to tennis tournaments in years past at the Club--fun and fond memories.

With the tennis nets and posts removed, guests were able to stroll around from court to court sampling food and wine. During the event, a silent auction ensued, where bidding was done exclusively by mobile phone. We donated a vertical of our Cabernet Sauvignon in a wooden box to the silent auction. And then, after the food and wine tasting, a live auction was held on center court for the guests at family and corporate tables, followed by music and dancing. 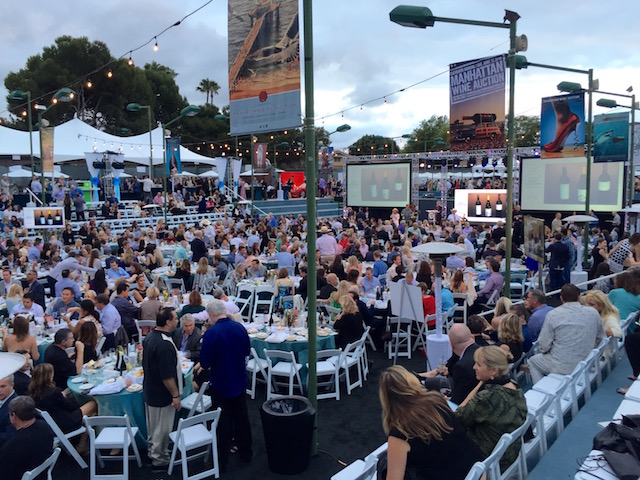 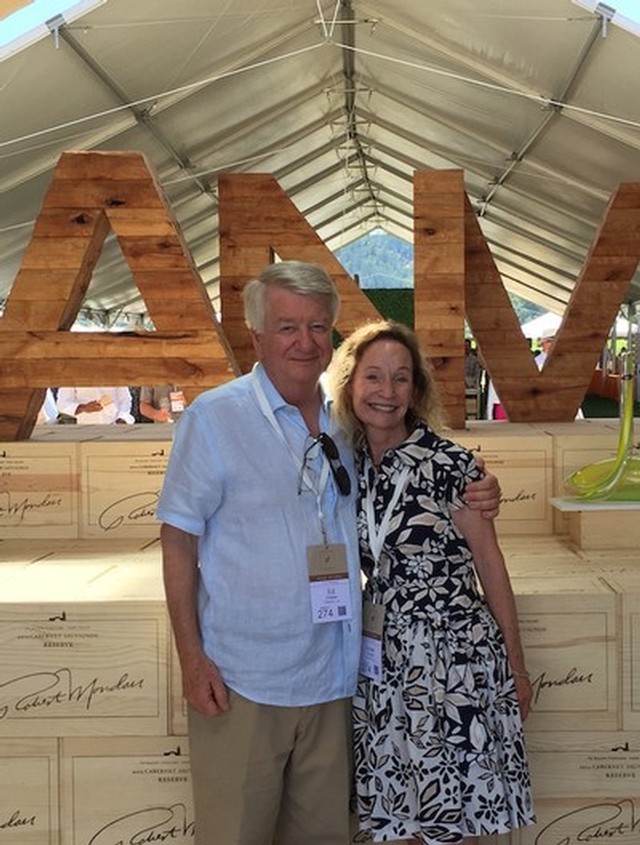 Ed and I spent much of last week partying at the Napa Valley Vintners Auction Napa Valley to help raise $14.3 million for Napa charities, so there's no guilt attached for having such a good time.

Starting Wednesday, we attended the Auction Kick-off Party at Gott's Roadside for "burgers, bottles and beneficiaries," with fellow vintners, a much more casual event than those we've attended in the past; last year's luncheon at Meadowood was a little more formal (although terrific, nonetheless). This year, the burgers, sweet-potato fries, tacos and shakes (mine chocolate) were finger-licking good. And did I say wine? There, we had the opportunity to meet the leaders of the local non-profit youth and health organizations benefiting from the Auction. We sat with the CEO of the Big Brothers and Sisters Organization and learned how boys and girls were paired with their big brothers and big sisters according to their experiences and about the success stories that followed from these relationships--how many of these troubled boys and girls were now attending college. This dialog made it very clear that all the partying was really for a much-needed cause.

And--after a much-needed nap--that evening Ed and I headed off to the tent-raising party that Meadowood puts on annually for its members to compensate them for the golf and tennis facilities that are closed during Auction. We participated in a lovely outdoor reception and enjoyed schmoozing with fellow members. We got a sneak peak at the tents that were already set up for Saturday's Auction. And did I say wine?

Thursday, while others were enjoying dinners at vintners' homes and wineries, Ed and I again rested up for Friday's and Saturday's festivities. Friday, we, along with 2000 other guests, attended the Napa Vintners Barrel Auction, at the Robert Mondavi Winery. Outside, where it was a pretty toasty 105 degrees F, we munched on delicious tidbits, such as smoked salmon on creme fraiche and pork sliders from Napa chefs paired with wine from Napa wineries. Then we ducked into the barrel room to cool off, where Napa vintners provided not-yet-released barrel samples from their 2013, 2014, and 2015 vintages, upon which guests could bid for future cases. My favorite was Paul Hobbs Winery 2014 Nathan Coombs Estate 100% Cabernet Sauvignon, from Coombsville, an up-and-coming AVA. Paul's barrel lot scored a whopping $36,700. (The very top barrel lot was for Melka Wines at $62,100.) And then there were also yummy chocolates to pair with all those red wine barrel samples.

Saturday, the day of the big Auction on Meadowood's fairway, Ed and I did some more schmoozing and chatted up David Duncan, President of Silver Oak Winery, who introduced us to the talented actress Courtney Cox and her cute boyfriend. David and his wife Kary donated an auction item featuring a trip to their winery for dinner with Courtney and her "Friends."

After the reception featuring Hog Island oyster stations, we headed into the big tent, where 900 people bid on fabulous trips, wines and other experiences for fabulous price tags. It was amazing to watch the bids rise into the stratosphere. The top auction item was "Into Africa, Incomparably," donated by Staglin Family, which went for $170,000, and then doubled to extend to another couple. The Fund-A-Need bought in $2.1 million alone from 100 paddles. 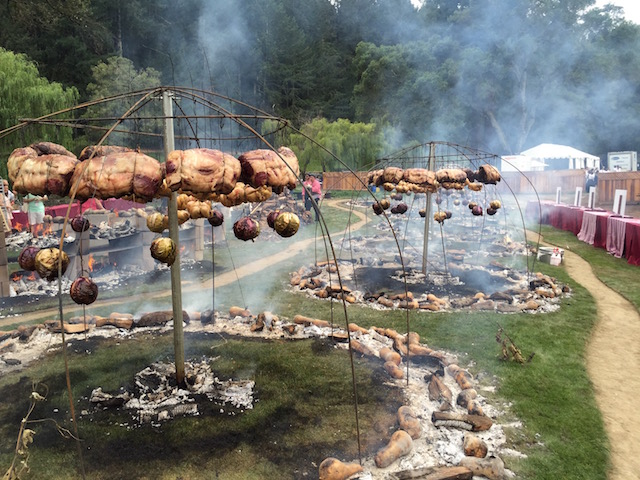 We served our 2012 Vineyard {511} Diamond Mountain District Cabernet Sauvignon at our table during the auction, as well as at the table for the dinner under the stars which followed. The dinner was prepared by Argentina's celebrity chef Francis Mallmann. We had eaten dinner at Mallmann's restaurant both times we were in Mendoza, so were really looking forward to this dinner and weren't disappointed. It was truly amazing to see the beef we would eat hanging over live fires as it cooked. And it was so delicious. A Texan in the beef business at our table instructed me to choose the cap of the ribeye and, wow, was it delicious! Dinner was "capped" off by dancing to a lively 30-piece Cuban band.

For the E-Auction, Ed and I donated a double vertical of our 2010, 2011 and 2012 (both 750's and magnums) Diamond Mountain District Cabernet Sauvignon and a lunch for two couples overlooking our vineyard. The lucky bidder was a gentleman from Bakersfield, and we hope to meet him soon when he claims his prize.