On April 23, the Napa Valley Film Festival (a non-profit organization), in partnership with the new City Winery (formerly the Napa Opera House), presented Sensing Red: An Evening of Film and Frivolity, to raise funds to benefit the NVFF Education Programs that reach over 3,000 Napa Valley students and the community at large year-round (a mission of the Festival.)

The evening was so much fun and interesting, starting with an exclusive backstage tour and pre-reception for NVFF Patron Circle Members; a champagne tower by Domaine Chandon; craft red cocktails by mixologist Scott Beattie; nibbles by Chef Daryl Murimoto from Estate Events at Meadowood; and a sumptious 3-course steak dinner by City Winery Chef Joseph Panarello, paired with wines from Napa Valley's top vintners (the best, of course, being Vineyard {511} 2010 Diamond Mountain Cabernet Sauvignon.)

The highlight of the evening and the motivation for the event's name, Sensing Red, was the screening of the award-winning documentary Red Obsession, directed by David Roach and Warwick Ross, about the Chinese obsession with Bordeaux wines. The screening was followed by a lively panel discussion, moderated by Karen MacNeil, author and Chairman of the Wine Department at the Culinary Institute of America. Expert panel participants were Michael Silacci, Winemaker, Opus One; Brian Reimer, Executive Chef, Maison Boulud; John Conover, GM, Plumpjack Winery, Partner CADE winery; and Jay Behmke, Managing Director of Yao Family Wines, all of whom had a different perspective on the Chinese and Bordeaux wine industries.

The evening was topped off by gifts of Kollar chocolates. Yummy.

My husband Ed is one of the executive producers of the wonderful 2011 documentary feature film Jiro Dreams of Sushi, which was directed by David Gelb. It is about the almost 90-year old sushi chef, Jiro Ono, his search for perfection in the making of sushi, and his relationship with his two sons. In fact, Bob Iger, CEO of Disney, uses this film as a mangement tool to motivate his staff. Jiro Dreams of Sushi, which was screened at the 2011 Napa Valley Film Festival, is the film of which Ed is the most proud to have been a part.

On April 23, 2014, within 90 minutes of landing in Tokyo to meet with Japan's Prime Minister Shinzo Abe, Abe took President Obama to eat at Sukiyabashi Jiro, the only sushi restaurant in the world to be rated with three stars by the Michelin Guide. There are only about 100 restaurants in the world with three Michelin stars and, I'm sure, it took a prime minister to score the reservation there. It is located in a Tokyo subway,  has only ten seats, and is extremely popular. There is no menu, one eats what chef/owner Jiro Ono puts in front of him or her, and the meal costs about $300 per person.

Although director David Gelb started out to make a movie about several sushi restaurants in Japan, after meeting chef Jiro Ono, felt compelled to do the film about him and his fabulous restaurant. You may stream the film on Amazon Prime Instant Video or on Netflix.

At the end of the meal, President Obama told Prime Minister Abe that, even though he had eaten alot of sushi as he came from Hawaii, it was the best sushi he had ever eaten. If you are driven to make a reservation to fly to Tokyo, just know that, it could take at least 3 months to get into Sukiyabashi Jiro, if ever.  You may have better luck with the French Laundry!

On Sunday afternoon, March 30, Ed and I drove down to the Anaheim Hilton, where the Orange County Wine Society sponsored The Wine Extraordinaire--a unique opportunity for participants to taste wines from small production wineries from every California region, along with culinary samplings from many Southern California local restaurants. Over 85 wineries, including Vineyard {511}, participated by pouring their wines to help raise money to fund winemaking, viticulture and culinary scholarships at 7 California higher education institutions. Ahnfeldt Wines and Hartwell Estate Vineyards, also from Napa Valley, were also in attendance. And, as we experienced at CabFest Napa Valley and at Harvard Healthy Kitchens, where we poured our Vineyard {511} Diamond Mountain Cabernet Sauvignon, everyone said our wine was the best in the show. 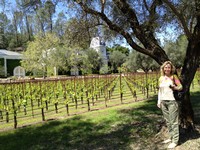 Ed and I and our good friends Charles and Kalani Engles were given a very special tour of Spring Mountain Vineyards, in St. Helena, by its general manager (our tennis buddy) George Peterson. We were amazed at the immense and beautiful grounds, underground caves dug over 100 years ago (by Chinese immigrants), and gorgeous Victorian mansion restored by owner Swiss investor Eli Safra. Before Safra bought Spring Mountain Vineyards, the mansion was used as the home in the TV series Falcon Crest. The vineyards are surrounded by olive trees and bluebird houses to keep the birds from eating the grapes.

We had a lovely winetasting overlooking the vineyards and particularly liked the 2005 and 2009 Elivette wine (named after the owner Eli and his wife Evette. We couldn't help but bring some of the Elivette home with us.

Saturday night Ed and I hosted a dinner party at our home at Vineyard 511. Our esteemed guests included vintners from Ackerman Family Vineyards, Paratus, relatives of Fisher Winery and other good friends, who enjoyed getting to know each other and eating delicious appetizers, such as lobster rolls, and rack of lamb and strawberry shortcake. The scrumptious meal  was catered by Market restaurant in St. Helena. Most importantly, we celebrated Ed's half birthday!