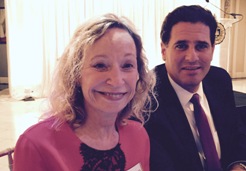 Ed and I were lucky to sit next to Israeli Ambassador Ron Dermer (picture) at the dinner held at the National Museum of Women in the Arts, a glorious restored 78,810 square foot former Masonic Temple, which recognizes and shares the contributions made by women of all eras and places. Ambassador Dermer was born and raised in Miami Beach, Florida, and was educated mostly in the United States and Oxford University. Before being named Ambassador to the U.S., he served as Senior Advisor to Israeli Prime Minister Benjamin Netanyahu. Dermer also thinks the proposed treaty with Iran to limit its nuclear weapons is a bad deal for Israel and for the world. He is now an Israeli citizen.

Another highlight of the conference was the kick off activity of a cruise along the Potomac to George Washington's Mount Vernon, where we had dinner. We also had lunch at the Newseum, an extremely interesting museum dedicated to the news. 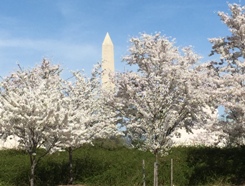 Ed and I arrived in Washington a day early in time for the Cherry Blossom festival. This was the only time the conference was held at the same time as the festival, and we spent a glorious afternoon strolling along the Potomac surrounded by the beautiful blossoms. We finished this day with a happy hour toast at the Williard Hotel across from the White House, where many other toasts were made by prior President Grant.

Also staying at our hotel (the Ritz Carlton) was the new Prime Minister of Iraq, Haider al-Abadi, who was in town for his inaugural meetings at the White House. Talk about security; we almost ran out of time retrieving our luggage to check out.

Ed and I recently attended a Napa Valley Film Festival (NVFF) sneak preview of a terrific film: Woman in Gold, at the Cameo theater--the oldest single-screen theater in the US--in St. Helena, California. The film starred the immensely talented Helen Mirren and Ryan Reynolds and was directed by Simon Curtis (My Life with Marilyn). Mirren stars as the Jewish exile Maria Altmann, who escaped from Austria and likely death in the camps; she sought the restitution of the luminous Gustav Klimt painting--in shimmering gold and oil on canvas--of her aunt Adele Bloch-Bauer, the subject of the painting, and four other Klimt paintings, all looted by the Nazi's in World War II Austria from her family.

At the time of the 8-year effort to regain the paintings, the one named "Portrait of Adele Block-Bauer 1" (1907) was considered by many to be Austria's Mona Lisa. Reynolds played her only-32-year-old attorney, E. Randol (Randy) Schoenberg, grandson of Austrian composer Arnold Schoenberg, who himself fled Austria in 1933, and son of Altmann's close friend. Together Altmann and Schoenberg took the claim against the Austrian government all the way to the U.S. Supreme Court, which found in favor of Altmann. The Austrian federal art museum, the Belvedere, where the paintings had been exhibited, returned the paintings to their rightful owner--Altmann.

Following the screening, David Glasser, President and COO of The Weinstein Company, which generously provided the film, participated in a Q&A with Festival founder Marc Lhormer. (See photo.)

The film was especially poignant for Ed and me as we had attended a showing of the painting "Portrait of Adele Block-Bauer 1" at the Los Angeles County Museum of Art (LACMA) shortly after it was returned to Maria Altmann in 2006. We met both Altmann and Schoenberg there. Although LACMA had so much wanted to acquire the painting, it was purchased by Jewish philanthropist and cosmetics heir Ron Lauder (son of Estee Lauder), for $135 million and hangs in his Neue Galerie in New York City. The other four Klimt paintings were sold at auction for $192.7 million. The combined proceeds for the five paintings were bequethed to her heirs. Altmann passed away in 2011 just after her 95th birthday. What a woman!

Prior to the screening, we were treated to some great Freemark Abbey Chardonnay, and afterwards we walked over to Caldwell Snyder for a VIP after-party catered by Meadowood Estate Events. In addition to the 2010 Diamond Mountain District Cabernet Sauvignon we donated, patrons were treated to Alpha Omega, Sullivan, and Paratus wines. An after-after party at Raymond Vineyards was enjoyed by many of the late night revelers.

The wonderful evening was a fundraiser to support the NVFF's year-round film education and outreach programs and exemplified what the Festival offers as part of its Patron Circle and year-round programming programs.

Ed and I took a short drive from our home in Redondo Beach to the luxury boutique hotel Shade in Manhattan Beach to participate in the first annual Stars of Napa Valley Wine Festival. Shade partnered with wineLA to present this super popular event. From 2- 5 pm we poured our 2010 and 2011 Vineyard {511} Diamond Mountain District Cabernet Sauvignon for members of the trade -- restauranteurs, distributors and media -- and then from 7 - 9:30 pm poured our cabs again for consumers. We were among 40 other Napa vintners, including Alpha Omega, Heitz, Frank Family and Rocca, participating in this terrific tasting event. During the evening portion, a silent auction of wines donated by the attending vintners were part of a silent auction to benefit the Manhattan Beach Middle School. Ed and I were proud to donate a vertical of our Diamond Mountain District Cabernet of all of our releases -- 2009, 2010 and 2011 -- in a nifty wooden box.

Tastemade, a food and travel video network for the mobile generation, had a party at its Santa Monica studios to celebrate its deal with Apple TV. Tastemade provides a digital network for every screen from smart phones to connected TV. Its programming is done in its studios, at which Ed and I attended this fun and lively party. As of this writing, it has an amazing 42,326,050 social followers, a good number of whom were at this party. Adding delicious (and experimental) elements to the mix were food and drink stations, which included a chefs creating yummy appetizers with blow torches (see photo).  Mmmmmmmmmmmmm good!