On March 15 (also known as the Ides of March--oops the day Caesar was killed), Ed and I drove from our home in Redondo Beach to Pomona to participate in the Family Winemakers of California first Southern California Tasting at Fairplex. Almost 100 small, family-owned wineries, from across California, poured some 500 terrific wines. We saw friends from wineries in Napa Valley there- tennis buddy Mike Beatty, from Howell Mountain Vineyards-- and made some new friends, too: pouring next to us was Jon Phillips, from Inspiration Wines, in Santa Rosa. It was a great turnout of about 750 members of the trade--retailers and distributors.

Our thanks to the many volunteers who helped make the event the success it was.

On the afternoon before the Academy Award show, Ed and I were lucky to be invited to the Film Independent Spirit Award luncheon ceremony in a tent, at Santa Monica Beach. It was a beautiful, Southern California afternoon at the water's edge, where we enjoyed cocktails and hors d'oeuvres before the luncheon with movie stars like Adrian Brody and J.K. Simmons. 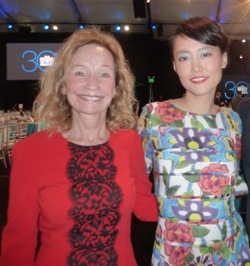 We then joined our table hosted by Amplify Digital Distribution Company, on whose board of directors Ed sits and of which he is a major investor. At our table was Kevin Iwashina, also of Amplify and agent of Preferred Content; Rinco Kikuchi, nominated for Best Female Lead for her role in Kumiko, The Treasure Hunter  (an Amplify film); and Sara Colangelo, nominated for Best First Screenplay for Little Accidents (another Amplify film).

It was a lively ceremony, hosted by Fred Armisen (Portlandia and Saturday Night Live) and Kristen Bell (House of Lies and Veronica Bell). And the food was yummy too. Congratulations to the winners! Here are some of them:

What's a more romantic way to spend Valentine's Day than to pour our Vineyard {511} 2010 Diamond Mountain District Cabernet Sauvignon at the San Francisco Chronicle's Fort Mason? Ha Ha. The event is the largest competition of Amerian wines in the world and is an annual fundraiser for wine studies, viticulture and enology higher educational programs in California.

Just prior this public tasting, the SF Chronicle held its annual wine competition, which received 6417 entries from more than 28 states. Fifty-nine wine professionals from around the country judged the wines. Of this enormous number of entries, we are so proud to say that Vineyard {511} 2010 Diamond Mountain District Cabernet Sauvignon placed in the top 100 and won a silver medal. Yeah! Many of the winning wineries were among the 800 wineries pouring. Five thousand people attended the sold out event.