David Gelb, the director of the super successful documentary Jiro Dreams of Sushi (for which Ed was an Executive Producer), just sold a docu-series about other famous chefs to Netflix. Jiro, about an 85-year-old sushi chef, whose three-Michelin-starred restaurant in a Tokyo subway, was 30-year-old Gelb's first feature. The terrific film was about Jiro's striving for perfection and about his 50-year-old sushi chef son wondering when his father would retire so he could take over the restaurant. (The younger son, knowing he would never take over, opens his own sushi restaurant in another part of Tokyo.) It was also the restaurant to which Prime Minister Abe of Japan took President Obama right off of Airforce One upon Obama's arrival in Japan.

Ed and I are looking forward to seeing Gelb's other documentaries about talented chefs and their stories creating mouth-watering food in exotic locations. Bon appetit! 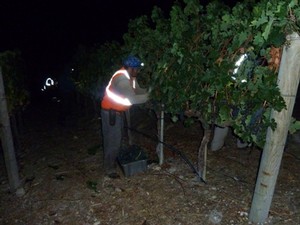 Thursday night (Sept 18), we watched as vineyard workers harvested our grapes at 9:00 pm. That was the first time since our first harvest in 2008 that the harvest was done at night. Although the moon and stars were out, it was the flood lights reflecting off of the workers (who also had night lights on their heads), that made this harvest a ghostly experience. 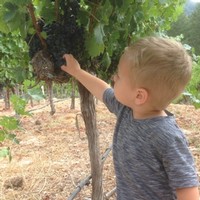 Of course, it wouldn't have been the successful harvest that it was, had it not been for our 21-month old grandson, Ian, checking to see if the grapes were ready for harvest. He had the magic touch.

The Society has built a nice-sized cellar (6000 plus bottles) from which the wines poured and paired with the various courses at dinner are sources. Among others poured that night was a 2007 Radio Coteau Pinot Noir "La Neblina," from the Sonoma Coast, which paired nicely with the bigeye tuna and chanterelles and butterbeans. For dessert we had a 2009 Arrowood, Late Harvest Riesling "Saralee's Vineyard," from Sonoma's Russian River Valley.

Lunch in the Grove at Lynmar Winery 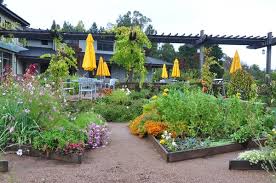 On a lovely Saturday afternoon, Ed and I attended a tour, tasting and luncheon at Lynmar Winery, in Sebastopol, California, guests of owners Lynn and Anissa Fritz, along with other members of the Family, of which Ed and Lynn are also members. Lynn led us on a tour of Lynmar's extensive vineyard and its fantastic, colorful vegetable garden (see photo), of which we were all so envious. We sampled Lynmar's 16-year-old balsamic vinegar right out of its barrels; the balsamic was made at Lynmar over all of the 16 years and tasted like candy.

A delicious lunch consisted of salads, chicken and cookies from many ingredients grown at Lynmar. Lynmar Chardonnay and Pinot Noir served with lunch were fabulous too.

On November 11, the Napa Valley Film Festival gave Silicon Valley a first look at what the Festival has in store November 12-16, 2014. This preview party was held at the Morgan Estate, in Los Altos Hills, CA, an incredible mansion, that looked like it belonged to an English duke. Festival Founders Brenda and Marc Lhormer presented a preview of the 2014 Festival program and a taste of the Patron Circle experience with rare library wines from Napa and Bordeaux by Benchmark Wine Group, hand-crafted cocktails by Scott Beattie of Meadowood Napa Valley, and mouth-watering cuisine from Estate Events by Meadowood.

As a special bonus, filmaker Kelly Cox presented an excerpt from her new film Big Dream, which explores the lives of young women who've been inspired to pursue careers in science, technology, engineering and math. Big Dream will have its world premiere at this year's Festival in November and show in Napa Valley high schools.

News Flash: the Festival's Celebrity Tribute honoree will be none other than Kevin Costner, who brings his provocative new film Black and White to screen on Thursday, November 13, and will participate in the post-screening Q&A with director Mike Binder. On Friday, Billy Bush (who MC'd the evening's program), will host a wide-ranging conversation with Kevin avout his career as actor, director, producer. Following the Celebrity Tributes, Patrons will continue the celebration at Jean-Charles Boisset's Raymond Vineyards. Mike Myers is also attending the Festival with Shep Gordon, super talent agent and subject of Mike's hilarious and touching documentary Supermensch: The Legend of Shep Gordon. Also screening at the Festival is The Disappearance of Eleanor Rigby: Her & Him, starring Jessica Chastain and James McAvoy, and Imitation Game, starring Benedict Cumberbatch and Keira Knightley, which just won the Toronto Film Festival Audience Award.

Hope to see you at this year's marvelous festival!

Dinner for 700 in Calistoga

Can you imagine a dinner for 700 people stretching a quarter of a mile down the main drag of Calistoga? Well, wonder no more. On Sunday evening, September 7th, Ed and I were invited by our generous nextdoor neighbors, Suzie and Norm Kiken, of the wonderful Reverie Winery (first two on left in photo), to the Calistoga Harvest Table. The event was sponsored by the Calistoga Chamber of Commerce, and the table stretched all the way down Lincoln Boulevard, which was closed to vehicle traffic.

Fifteen fine restaurants along Lincoln Boulevard sold tickets to a fixed-price dinner, at the table situated in front of that restaurant. We dined at Brannan's, where executive chef Rob Lam (also the executive chef at Butterfly, on the Embarcadero, in San Francisco), provided an over-the-top delicious meal with four starters (my favorite being Tory Farms peach salad), four platters of main dishes (my favorite being seafood paella topped with soft-shell crab), and a decadent dessert of warm chocolate pot de creme, consisting of Vietnamese coffee and five spice chantilly. We were drinking Rombauer 2013 Chardonnay and the Flowers 2012 Pinot Noir, both of which went well with the delicious meal.

We hope this classy outdoor happening becomes an annual event!