Ed and I took his brother, sister-in-law, two nephews and their spouses (with 10-month old Georgie in tow), our daugher Kelly and husband Jeff and their son Ian (our grandson) for a tour, tasting and scrumptious lunch at Tim Mondavi's Continuum Estate. The contemporary-looking winery, on Atlas peak, is amazing, not surprisingly as it was designed by renouned architect Howard Backen.

After the tour, we were served roasted summer vegetables with balsamic vinagrette and burrata, fregola tabbouleh, pan-seared chicken breasts with romesco sauce, and plum-frangipane tart with soft whipped cream, all prepared by talented chef Sarah Scott. The meal was paired with 2009 and 2014 Continuum--a blend of Cabernet Sauvignon, Cabernet Franc, Petit Verdot and Merlot. What made the meal really special was that Tim and his daughter Carissa joined us for lunch, and we really enjoyed getting to know them.

The afternoon was dedicated to honor The Queen of the Valley Hospital, as Tim generously donated the luncheon, which Ed and I bid on and won at the hospital's foundation dinner.

As we were leaving, Tim presented Ed, me and daughter Kelly with a magnum of 2013 Continuum. 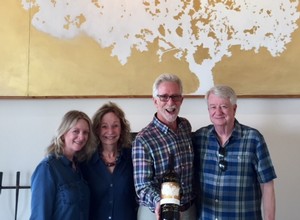 That magnum was enjoyed by the whole family that night with dinner--we didn't waste any time with that!