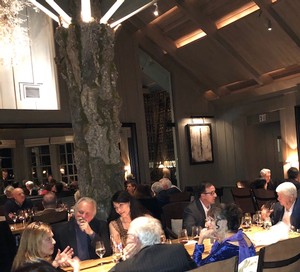 Seated at our table were current NVFF board members Michael Wood, of Baywood Capital and owner of the Mount View Hotel and Spa, in Calistoga, and his wife Stephanie; Bob Bassett, Dean of Chapman University's Dodge College of Film & Media Arts, and his wife Janell. Also seated at our table were Kathy Buck, proprietor of the historic Cameo Cinema in St. Helena (the 107-year-old, fully-digital movie theater, only one of 9 single-screen theaters in the U.S. to offer Dolby Atmos sound); John Brazzale, NVFF Development Consultant; and Ed Ojdana, co-owner of Vineyard {511} and former board member and founding patron (along with myself) of the NVFF. There was so much buzz about film at this table. 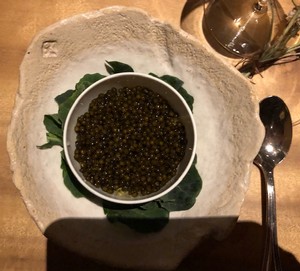 Another yummy item on the menu was black cod steamed in mustard greens with cultured butter, 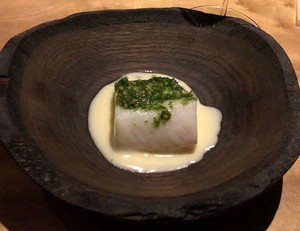 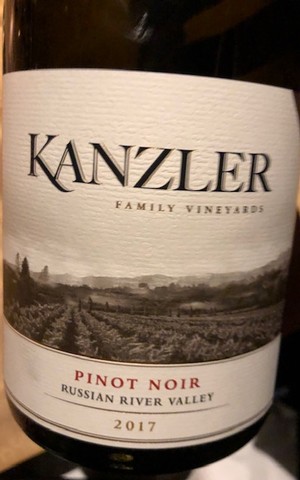 There were also silent and live auctions, where trips to Bali and Malibu were offered. Ed and I won a 3-day day package, that included 2 tickets to the V Foundation for Cancer Research Wine Celebration Weekend in August 2020, including winery lunches, dinners, panels and gala. It was donated by the V Foundation, begun by Jimmy Valvano, North Carolina State basketball coach who, when dying of cancer, challenged his fans to find a cure for cancer. Such a worth cause.

The evening served as a wonderful taste of what's to come for Cinema Napa Valley's Patron Circle and the NVFF's 10th anniversary!