Late in February, Ed and I poured our 2014 Vineyard {511} Diamond Mountain District Cabernet Sauvignon barrel samples at the 21st Annual Premiere Napa Valley barrel tasting and futures auction at the Culinary Institute of America in St. Helena. This was our second year at this event, which raises funds to support the vintners and charities in Napa Valley. Hosted by the Napa Valley Vintners, a non-profit organization, this year it raised $4.2 million. Bidding is open to wine-trade professionals (retailers, restauranteurs, and wholesalers), and their attendance is a wonderful way for the more than 200 vintners who participated to enhance their relationship with them. The lots were mostly 2015 cabernet sauvignon. The live auction is characterized by very lively bidding of very lively amounts. An example is the highest amount which went for $200,000 for 5 cases of 2014 Scarecrow Cabernet Sauvignon--or $3,333 per bottle! That's what I call bidding!

Twenty per cent of the lots were sold in an online auction, which raised almost $500,000 of the day's total sales. There was a greater emphasis this year on this part of the auction to enable trade bidders anywhere in the world to participate.This is where Ed and I donated our 5 cases, which were successfully bid on by John York, owner of the San Francisco '49ers. John sampled our wine while bonding with Ed as two alums from Notre Dame University. We welcome our newest friend and fan of Vineyard {511}! 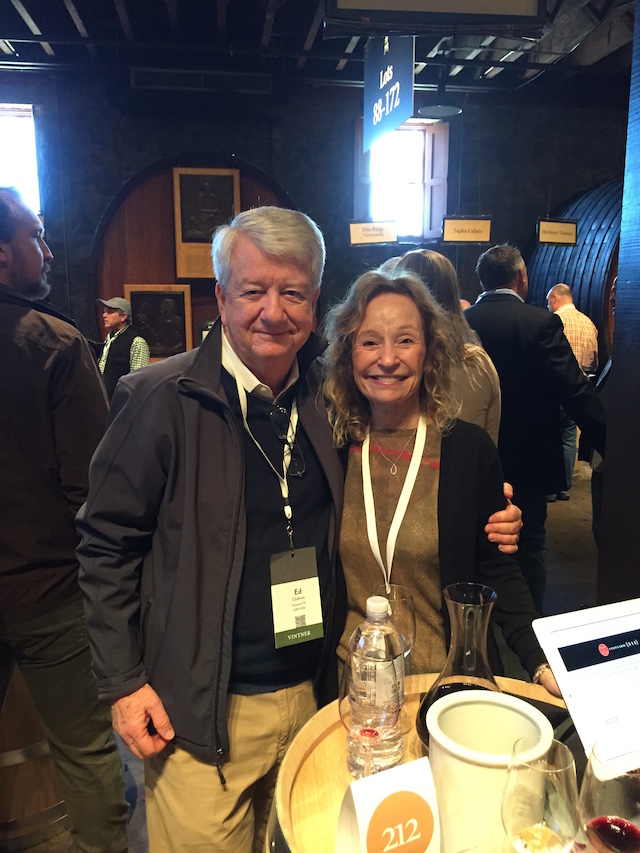