After our long weekend in Iceland, Ed and I headed to St. Petersburg, Russia, where we had been on our honeymoon 18 years ago. Then, we only spent a couple of days there as a shore exursion on a Baltic country cruise. This time we spent 6 days and found an entirely different city. The first time around, no one smiled and remnants of the worst of the Soviet Union were all around. This time we found a vibrant, cosmopolitan city, with lots of people on the street, hurrying to shop or eat at fine restaurants. And there was advertising all around.

After a late arrival at our Four Seasons Lion Palace Hotel, we had dinner at Percoso, its great Italian restaurant. A highlight of the meal was an inventive, delicious and decadent dessert called my grandmother's teacup, with ice cream and chocolate floating out of a teacup. When we at at the Cococo at the W Hotel on our last night in St. Petersburg, we also had a similar, creative dessert called my grandmother's flower pot. Russians (like me) like their desserts!

Then, the next morning, we were off to bed to rest up for a special early entry in the Hermitage museum, one hour before it was open to the public. The visit took us back to another world: a time when Catherine the Great commissioned whole buildings to house an ever-growing collection of the world's finest art. The former Winter Palace now spans just about every artistic period from Greek and Roman collecitons to Matisse. This museum holds the largest collection of art in the world. Among so many wonderful works of art, I loved the only Michaelangelo in the museum -- a sculpture of a crouching man and Naiad -- and a lovely oil on canvas of a long-haired nude woman swimming gracefully in the ocean, by Henri Fantin-Latour (1896). 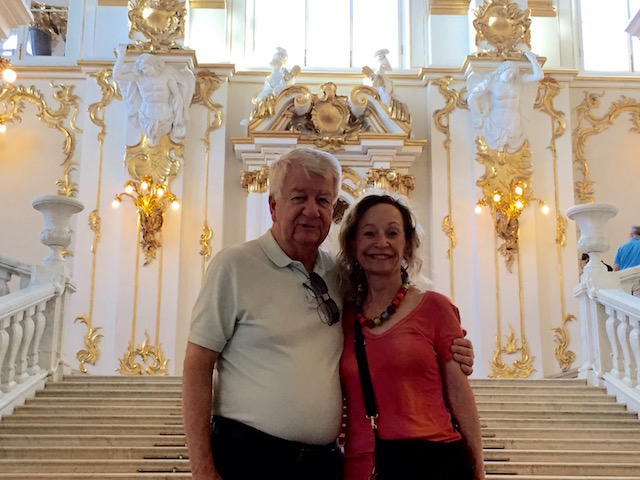 Outside the Hermitage, we were surprised to see men and women in blue sailors' outfits, waving blue flags and balloons, in honor of Russia's Air Force Day.

That afternoon, after a visit to St. Isaac's Cathedral, with its malachite and lapis lazuli columns, we ended our day with a visit to the brand new Russian Vodka Museum, located in the historical building of the Horse Guard Regiment Headquarters and Stables. There Ed did vodka shots with some of the veterans of the Russian Air Force celebrating Russia's Air Force Day. Ed certainly had to have a careful tasting of many different brands of vodka in order to celebrate the Russian holiday properly! 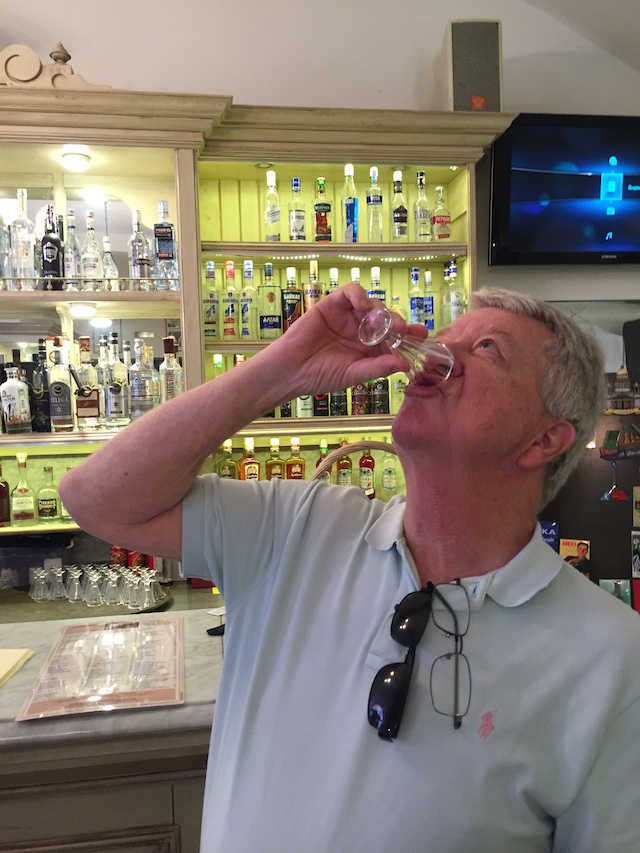 The next day, we drove out to the Russian countryside Catherine Palace, one of the city's most elegant and beautiful palaces. It was originally designed in the 1750s in the Rococo style by the famous architect Rastrelli (also designed many of St. Petersburg's grandest buildings, such as the Winter Palace). Catherine the Great remodeled it in the Neo-Classical style and, after her death. it remained largely unchanged for over a century until the Second World War, when the Nazi army, retreating after the unsuccessful siege of Leningrad (no called St. Petesburg again) destroyed the palace almost completely. After the war , the magnificent palace and its interiors were thorought and painstakingly rebuilt, but renovations at some part still continue.

While at Catherine Palace, we visited the fabulous Amber Room and amber workshops, where craftsmen rebuilt the wonderful amber panels lost in World War 11. The artisan explained how each panel was painstakingly recreated.

That evening we met up with our friends from California who were visiting St. Petersburg at the same time as we were. This great coincidence led to a terrific meal with them at Mamaliga, high above the city, with a great view all around, and an open kitchen.

The next day, Ed and I had equal time for the Russian Orthodox religion and the Jewish religion. We visited the Church on Spilled Blood  (named that way as it stands on the spot that Emperor Alexander 11 was assassinated in 1881), and visited St. Petersburg's beautiful and newly restored Grand Choral Synagogue, one of the largest in Europe. The church is the only one in the world covered completely inside and out by mosaices of tiles and precious and semi-precious stones. The synagogue, in the Moorish style, is still the center of Jewish life in the city.

On our last full day in St. Petersburg, we headed out to Peter the Great's summer palace, Peterof, to see the palaces' countless fountains and gardens. Peterhof Palace is often called the Russian Versailles due to the prominence of the fountains and gardens. The baroque palace, which overlooks them, is ornate, and we couldn't help think that all the over-the-top gold decorated rooms of Peterof, Catherine Palace and the Hermitage, was why there was a Russian Revolution. In addition to a very interesting visit underneath the fountains to learn of their remarkable engineering and history, we had a lovely lunch in the gardens. 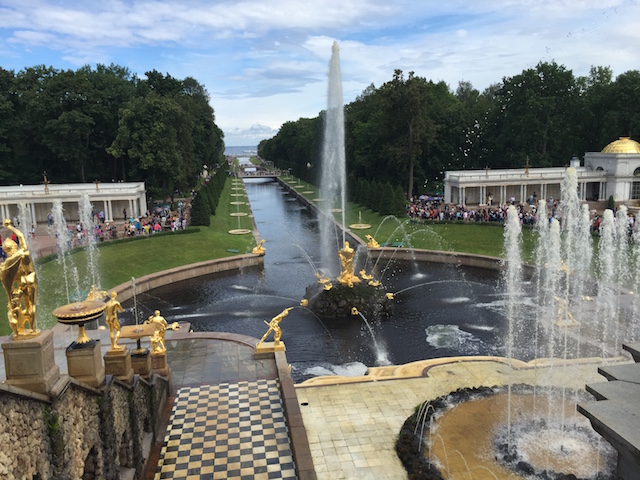 We finished off this terrific day at Cococo, the restaurant at the W Hotel, where the fun looking room was decorated with chandeliers topped off with -- get this--chicken feathers, instead of candles. How about that?

On the way to the airport on our last day, we visited the War Memorial dedicated to the Russian soldiers who died in World War 11 and the struggles endured by the people of the city during the war--a somewhat sad way to end our visit. However, we did get to visit a boutique food shop, which featured colorful chocolate shoes. Wear them or eat them? 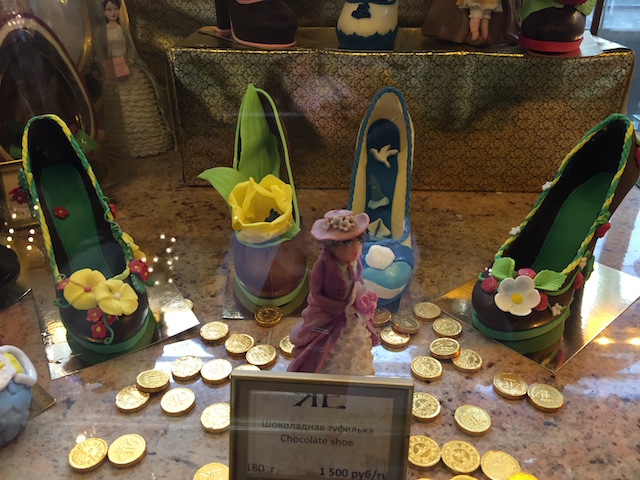 On our way home, we had a one-day stop over in Helsinki, Finland--a short, but sweet visit. Some of the highlights of our visit included a visit to a temple dedicated to meditation, a church in a cave, a restaurant with a wonderful sunset view of the Helsinki harbor, and a visit to the farmer's market for a snack of homemade waffles. Yum. We took a pass on the reindeer hot dog! 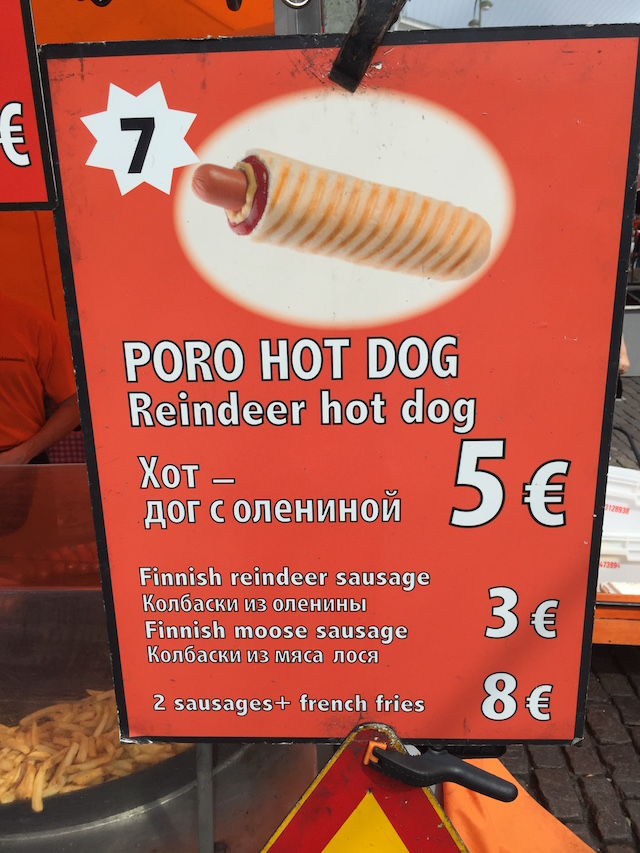