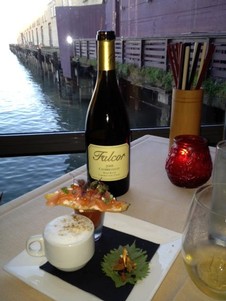 After another of Ed's board meetings, this time with the Executive Leadership Board of the Department of Viticulture and  Enology at UC Davis, we donned hard hats and green florescent vests for a private tour of the soon-to-be completed Jackson Sustainable Winery building, which will enable the adjacent winery, brewery, and food processing complex to become the first self-sustainable, zero -carbon teaching and research facility in the world. The $4 million building, slated for a grand opening May 29 of this year, was made possible by a $3 million pledge by the late Jess Jackson and his wife, Barbara Banke, proprietor of Jackson Family Wines.

The photo provided here shows the world's first wireless fermentation system, thanks to a $3.5 million network designed, built and donated to the university by the president and CEO of Silicon Valley-based Cypress Semiconductor Corp., T.J. Rodgers, who is also a wine lover and winery owner. Amazingly, the 152 fermentation tanks are wrapped in rubber, inspired by wet suits!

Yesterday, we ventured out of Napa Valley to Sonoma for the Eighth Street Wineries Association Open House with my brother and sister-in-law Herb and Rita Silverman, who were visiting from Southern California. At this annual event, we explored ten neighbor wineries,  which included MacRostie and Patz&Hall, and enjoyed their new and current releases, barrel samples and library wines, paired with exceptional gourmet fare.

Next,  we wound our way back to Napa Valley and the gorgeous Alpha Omega winery, where owners Michelle Fields Blaggett and Robin Blaggett treated guests to an evening of mouth- watering smoked meats, created by Robin Blagett, pizzas by Tra Vigne, and lively foot-stomping music.

Wine Tastings Up and Down Napa Valley

Last night, Ed and I attended two terrific receptions at the beautiful Silverado and Raymond Vineyards, as up and down Napa Valley wineries were hosting tastings for the wine buyers and media folks attending the 17th annual Premiere Napa Valley (a wine futures auction that raised $3.04 million for the Napa Valley Vintners' Association programs.)

At Silverado, one of the media members we talked with was Jay Spaleta, Associate Publisher at Wine Enthusiast, to whom we promised a tasting of our own Vineyard {511} Cabernet Sauvignon when he returns to Napa Valley next time with his wife. We ate some fabulous sliders, topped with caramelized onions, while gazing at the wonderful view  overlooking the vineyard; and afterward, in the barrel room, we were treated to tastings of various wineries, including Alpha Omega, Frank Family and Rombauer.

We chatted with Frank Family winery owner Rich Frank, not only about his wines, but also about his successful TV shows, Royal Pains and The Americans, for which he is the executive producer. We also chatted about our small world that his kids and my nephew, Geoff Silverman, manager of T.V.writers, went to high school together.

And then, while tasting some delicious Rombauer Chardonnay, Rombauer owner K.R.Rombauer reminisced with us about the not too distant past when Rob Lloyd, our current winemaker, was the Rombauer winemaker. Another six degrees of separation!

Later that evening, we made our way to Raymond Vineyards, where masked owner Jean-Claude Boisset, looking very mysterious and debonair, welcomed us to his "Napa" Gras celebration, where we all donned colorful feathered masks.

Feted with abundant shrimp, sushi and oyster buffets, we were entranced by scantily-attired dancers hanging from the rafters of the fermentation cellar. We topped off the evening tasting the terrific soon-to-be-released Raymond Masquerade Cabernet Sauvignon in the plush and sexy red velvet room. 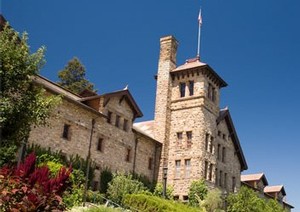